Here at Sales Cookie, we help customers automate their sales commission program. Our recommendation is always to simplify sales commission plans. The simpler your incentive program, the easier it will be to communicate it. As a result, the more likely you sales force will be to understand incentives and focus on goals.

This blog posts explains how to implement clawbacks correctly.

When Do Clawbacks Make Sense?

Clawbacks (sometimes also called reversals) give reps the benefit of the doubt and allow them to be paid earlier. Typically, clawbacks are used when you want to pre-pay commissions because deals have a high probability of closing. For example, you could decide to pay commissions immediately when a contract is signed (versus waiting for payment to be received from the customer – this could take months) or when an opportunity closes.

In short, you haven’t received payment yet, but expect to do so, and want to reward reps immediately so that they can focus on other deals in the pipeline. By paying commissions before payment is received, you reduce the time window between a/ closing a deal and b/ receiving corresponding commissions. Making your reps wait for payment can make them feel that commissions are “disconnected” from deals (due to delays required to receive actual payment from your customers).

Now, you also can’t afford to pay commissions for deals where customers cancel or fail to pay! You also want to make sure reps can’t game the system by prematurely declaring deals as “won” when they know that collection may be at risk. In short, you need some type of defensive countermeasure to handle failure to pay. Enter clawbacks.

How Not To Implement Clawbacks

This is a reasonable approach but you should be aware of potential issues:

Let’s elaborate on the last point. Consider our same example of a June commission statement, with a single canceled January deal. To make sure the reversal amount is 100% correct, you would need to:

Now suppose that in June you had cancellations not just for January deals, but also for February & March deals. It gets messy. Commission software such as Sales Cookie can automate this process for you. For example, if you issued a specific per-deal commission amount, we can lookup the original amount and issue a corresponding negative claw back. But if you paid a bonus (based on overall January attainment), you do need to fully recalculate affected past periods. 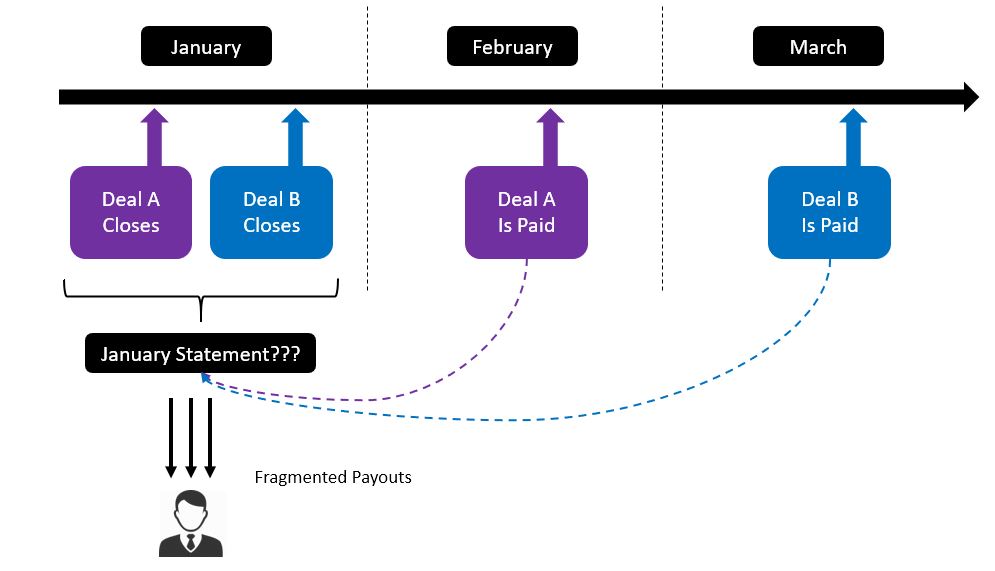 How To Implement Clawbacks Correctly

One approach is to stop trying to handle cancellations in a retroactive manner. Instead, simply track cancellations as new sales events with a negative amount, and apply them to the period during which the cancellation was confirmed.

Consider the same example. We’re in June and just discovered that a January deal was cancelled. You’d then record this cancellation as a negative deal, with a June (not January) effective date. June commissions will be penalized because of this cancellation. The main difference is that you are doing it non-retroactively.

This simplified approach is quite good but it’s not perfect. For example, if you paid a bonus (or higher commission rate) based on total January attainment, and you want to clawback this bonus based on cancellations, then your only choice is to recalculate past periods and deal with payment deltas. Otherwise, our recommended simplified approach (modeling a clawback as a forward refund) will save you significant pain.

If you use the more difficult approach (retroactive clawbacks), you’re probably setting a “cancellation date” field on deals. Each time you have a cancellation, you must locate the correct original deal, and set a cancellation date. Locating the correct deal isn’t easy if your sales tracking system (ex: SalesForce) is different from your payment tracking system (ex: QuickBooks). Often, names and amounts don’t match exactly between systems. For example, you could be processing a cancellation from “Blue Sky”. But on the original deal , the customer was “BlueSky LLC”.

Compare this approach vs. creating a new negative deal for each cancellation:

In some cases, cancellations cannot be tracked as new sales events. Indeed, some sales systems don’t create new rows / records when a refund occurs. Instead, the original sales data is updated.

For example, suppose that you had the following sales in January:

Later in June, a refund was issued for a January sale. Unfortunately, the system you’re using isn’t creating a new row for June (with a negative amount). Instead, it’s updating January rows with revised totals!

A good way to handle this scenario is to use deductions to calculate commissions. Using deductions, you always take into account all sales starting from a reference date (ex: year start). You can lean more about this approach here.

Essentially, each month, you’re re-evaluating total commissions due from year start. Because you’re deducting what you previously paid earlier during the year, you’re paying the correct amount. This approach allows you to handle situations where past sale data is constantly being revised.

Clawbacks make it possible for your reps to be paid earlier while still protecting the company from returns. They make sense if receiving actual payment from customers can take a while. Clawbacks also help your reps feel that your incentive program is “responsive”. When they close a deal, they don’t need to wait for months to receive their commissions.

However, an incorrect clawback implementation will leave you trapped in a web of unmanageable complexity. It’s more difficult to attribute clawbacks retroactively. A retroactive approach can cause operational, transparency, and legal issues. By treating cancellations the same way as forward-looking refunds, you can implement successful clawbacks which also penalize attainment. If your system cannot record cancellations as new events, consider using deductions.

All in all, consider the following when dealing with a clawback:

Don’t get scratched by a defective clawback implementation, and visit us online to learn more about how you can automate your sales incentive program!

8 thoughts on “How To Implement Clawbacks Successfully”